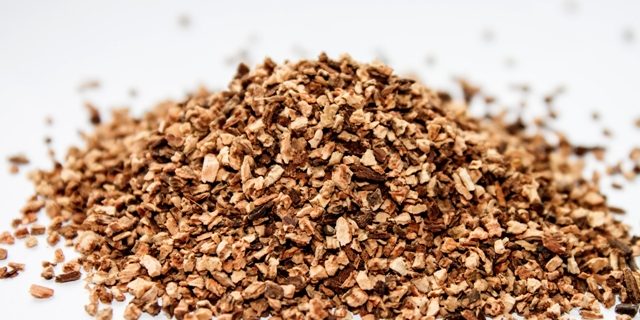 Cork is produced when the bark is stripped off cork oak trees (incidentally, this does not kill the tree and the bark will regenerate in around 9 years when it can be harvested again, making cork one of the most environmentally friendly products on the planet!). This cork bark will have a soft inside layer (where it is nearest the trunk), but the outside of the bark will be hard, brittle and woody. This bark is cut into strips and natural corks are punched out of the softer layer, leaving behind off-cuts which will include both softer cork from in between the punch holes and hard cork from the outside bark.

These off-cuts are then passed through a grinder , producing granules of various sizes and densities. These granules are then sorted by size (using mesh screens) and densities (using sloped shaking tables) to form a range of options in various bands of granules size and density. So for example we might supply you with cork granules of 1-2mm and 120-140 kg/m3.

The largest use for mid-density granules (so 90 kg/m3 up to 180 kg/m3) is cork flooring, but they are also used increasingly for artificial turf cork infill as well as for coarse granule insulation boards and a range of other usages. As the density gets higher, so the cork granules become more brittle and less elastic, so the cork begins to behave more like wood. Because there is less demand for cork granules the higher the density is, the price also decreases dramatically with density. So for the lowest density cork granules you can pay over €4 per kg, but for the highest density granules, less than €1 per kg.

The size of cork granule does not generally effect price and will be produced in bands, starting at 0.2-0.5mm and going up to 8-12mm. Smaller than this granule size is cork powder or dust, which is produced when cork products are ground down to size using grinding stones, which makes an extremely fine powder of around 200 nanometres in diameter.